The department provides well-equipped laboratory facilities and computer support of instruction. The College has been the recipient of three National Science Foundation matching grants providing funds for the purchase of equipment and instrumentation used in the biochemistry, cell biology, and organic chemistry, and forensic laboratories. Students are given a variety of “hands on” experience with laboratory equipment. 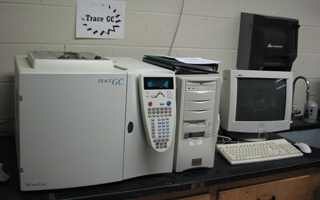 This instrument allows one to separate a mixture of several volatile compounds based on a combination of differences in boiling point and the interactions with the stationary phase of the column. The GC system is equipped with two types of detectors. The flame ionization detector is used to detect carbon-based molecules and the electron capture detector is used to identify halogenated carbon molecules, conjugated carbonyls, and nitro compounds. 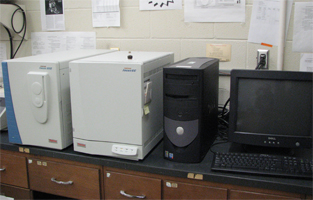 A powerful combination instrument that allows a mixture of volatile compounds to be separated first by gas chromatography and then detected using mass spectrometry. Here, each separate compound is hit with a highly energetic beam of electrons, which produces common molecular fragmenting patterns that can be compared with an equipped library database for molecular identification. The GC-MS instrument used is the Focus DSQII by Finnigan. 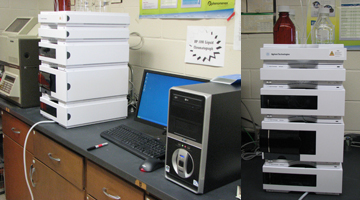 A powerful instrument that separates molecules that are not volatile enough to be separated with gas chromatography. The instrument is equipped with an autosampler and a quaternary pump to inject the sample mixture into a packed column. The molecules are forced through the column under high pressure, which separates them based on interactions with the stationary phase. The HPLC is equipped with a diode array detector, which can detect the presence of compounds that absorb light in the ultraviolet or visible region. 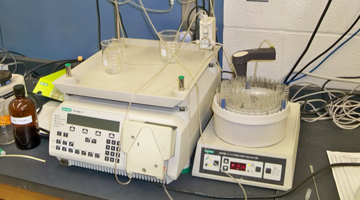 The low pressure chromatography system is designed to separate proteins by using a variety of pre-packed columns that can separate proteins on the basis of charge, size and or hydrophobicity by generating a solvent gradient. The samples are eluted and collected in an automated fraction collector. The protein separation can be monitored in real time with software that records the UV absorption of the separated proteins and the conductivity of the gradient as a function of time. 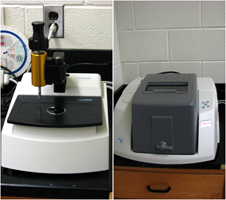 A powerful tool for identifying an unknown substance by revealing the covalent bonds present in the compound. The infrared spectrophotometer focuses infrared radiation into the substance and identifies the specific wavelengths of infrared light that are absorbed by the compound in question. The spectrum that is obtained can identify the particular compound present. The diamond ATR attachment allows a powder or liquid to be directly irradiated by the spectrophotometer without any special preparation. 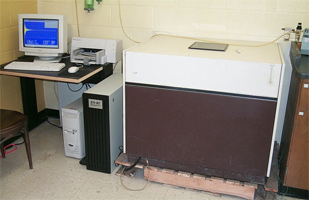 A system developed by Anasazi Instruments and funded by a CCLI matching grant from the National Science Foundation. This 90 MHz instrument is used by students to examine proton and carbon-13 spectra from a variety of organic and biochemical compounds that are synthesized and studied in the laboratory. 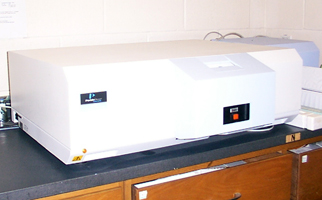 This spectrometer is able to detect the presence of a variety of fluorescent compounds (or chemiluminescent reactions) at very low levels. The emission spectra are all recorded and stored digitally using the FL Winlab software provided by PerkinElmer. The instrument is equipped with both a standard cuvet holder and a microplate fiber optic scanner. Data can be collected both as a traditional excitation/emission spectrum or in a kinetic mode over time. 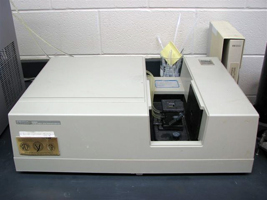 Collects ultraviolet/visible spectra for compounds almost instantaneously and store the data in digital form. This instrument can collect data kinetically as well as collecting an entire spectrum from 180 nm to 800 nm. This instrument was funded in part by a grant from the Pittsburgh Analytical Society. 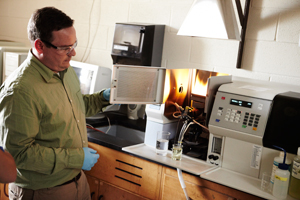 The Perkin Elmer AAnalyst 100 is an important tool used to detect trace metal atoms/ions in environmental, manufactured, or lab synthesized samples. The system consists of a high efficiency burner system and pneumatic nebulizer for sample introduction. The burner system provides the thermal energy necessary to dissociate the chemical compounds, providing free analyte atoms so that atomic absorption occurs. The instrument can be run in either absorption or emission mode. In absorption mode, the spectrometer measures the amount of light absorbed at a specific wavelength using a hollow cathode lamp (specific to the metal being tested for) as the primary light source, a monochromator and a photomultiplier tube to detect the metal analyte of interest 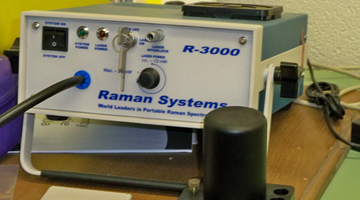 Raman spectroscopy is often used as a complimentary technique to IR spectroscopy. A high-powered diode laser irradiates a sample using a fiber optic probe and focusing lens. Raman scattered radiation from the sample is collected through the probe and sent to a CCD-equipped spectrometer. Much like in the case of IR spectroscopy, the spectrum produced can be used to identify characteristic functional groups in the molecule for identification purposes. 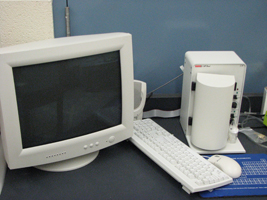 The electrochemical workstation is a versatile instrument that allows for the study of redox reactions by voltammetry, which measures the dependence of current on the applied potential of the working electrode. A variety of sampling methods (e.g., sampled current, differential pulse, square wave, and cyclic voltammetry) can be used to obtain a voltammogram and the half-wave potential for a redox process characteristic of a particular analyte species. 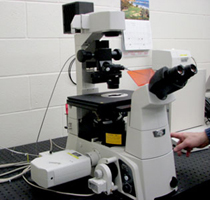 The confocal microscope is a quantum leap in microscope technology that is currently the rage in many research laboratories today. The microscope allows one to view cells at the subcellular level and variable depth using a laser scanning system as the light source and capturing the emission of light from fluorescently labeled sub-cellular organelles with high sensitivity and high resolution. The design of the laser scanning system and image capture allows one to focus very sharply at one specific location in the cell and eliminate scattered light from other more distant locations. 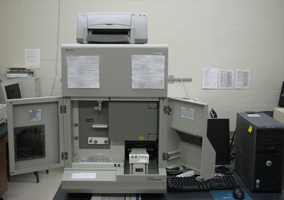 The genetic analyzer is a capillary electrophoresis system designed to separate and identify short terminal repeats of DNA made fluorescent by PCR amplification used in DNA identity testing. The fluorescent peaks are plotted as a function of time and stored on computer using ABI 310 software. The same system can be used to identify the sequence of a DNA sample by separating fluorescent DNA fragments generated by the Sanger method of DNA sequencing. 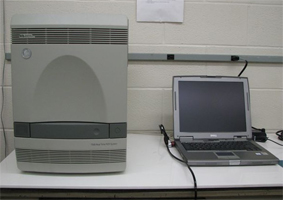 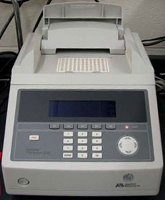 An instrument that will efficiently amplify specific DNA sequences that are needed in forensic DNA identity testing and will amplify DNA fragments that can be used in undergraduate research and molecular genetics cloning experiments. 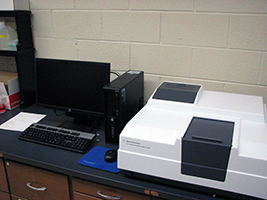 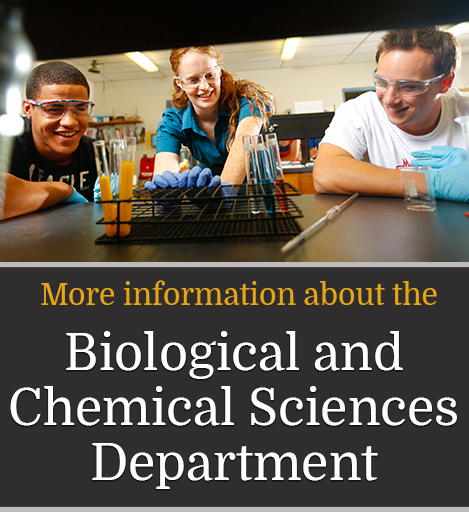