In early November, six members of the Roberts Wesleyan College chapter of the Society of Physics Students traveled to Orlando Florida for the 2012 Quadrennial Physics Congress PhysCon hosted by Sigma Pi Sigma, the physics honor society. 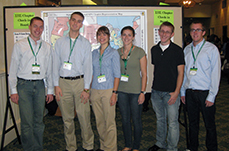 including Breakfast with the Scientists, where students could network with physicists working in various fields of industry and government.  This not only led to the feeling that all of their hard work in physics will actually be useful someday, but also to potential internship and job opportunities.  In addition, there were many well-received speakers who spoke on everything from science policy to astrophysics.