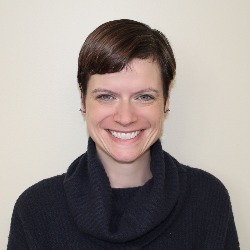 Shawnda Urie graduated with an M.A. in theatre from Villanova University with a focus on directing. She has taught acting, improv and theatre history at Delaware Theatre Company, University of Rochester, SUNY Brockport, Geva Theatre Center, Finger Lakes Community College and Genesee Community College. Shawnda was a teaching artist with the Rochester City School District for four years, where she helped develop national curriculum for integrating arts, math, and English standards for 1st and 2nd graders. She is also a teaching artist with Geva Theatre Center.

She has directed and produced The Velveteen Rabbit, Anne of Green Gables and the 24 Hour Play Festival on campus. Along with Leah Stacy, she produced and directed The Screwtape Letters, Peter/Wendy, The Lion, The Witch and the Wardrobe, The Importance of Being Earnest, Pride and Prejudice, Willy Wonka and the Chocolate Factory, Treasure Island, Charlie Brown’s Christmas, and The Crucible. She, along with Stacy, also curated the first two Roberts Wesleyan College Carolyn Bowman Theatre Symposiums and will host the third in the fall of 2022. She is an original member of Geva Comedy Improv, having performed with the troupe for three seasons, and was most recently seen onstage in the world premiere adaptation of At Swim Two Boys with DVC and the world premiere of The Fighting Girl’s Guide to Politics at Rochester Fringe. She previously directed productions of Polaroid Stories at Bread & Water Theatre, All This and Moonlight at Out of Pocket Productions, and directed eight seasons of the Young Writers Showcase at Geva Theatre Center.