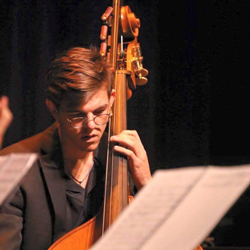 Rochester Philharmonic Orchestra bassist, Reed Sarasua Tucker, grew up in Sarasota where he began studying the double bass at age 12 with David Cobb. Reed earned his Bachelor’s Degree at the Robert McDuffie Center for Strings in Mercer University where he studied with many different teachers including Jeff Turner, Peter Lloyd, and Daniel Tosky. He received a Kovner Fellowship to complete his Master’s Degree at the Juilliard School where he studied with Hal Robinson and Rex Surany. After completing his Master’s Degree, Reed began an Artist Diploma at the Robert McDuffie Center for Strings before auditioning for the Rochester Philharmonic Orchestra.