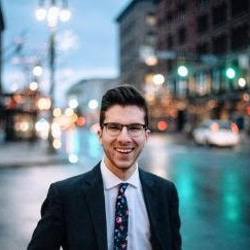 Parker enjoys accompanying and is a sought-after accompanist for both solo artists and large ensembles. He has accompanied numerous local artists and as an accompanist at Roberts, he has toured throughout the east coast and France. His chamber music performances include Beethoven’s Piano Trio No. 5 in D Major, Op. 70, No. 1, Rachmaninov’s Trio élégiaque No. 1, Herzogenberg’s Trio for Oboe, Horn, and Piano as well as premieres of student compositions. In 2018, Parker toured Nanjing, China with the Rococo Piano Trio.  Equally at home in multiple styles, Parker performs with bands throughout western New York including the recent Marvin Gaye Tribute concerts in Rochester and Buffalo. His own band, My Vegan Uncle, blends many styles including jazz, R&B, and progressive rock.

In addition to professional work, Parker has performed for many executive and fundraising events including the Eastman Kodak Company, The Landmark Society of Western New York and others. He regularly serves local churches, providing music in both traditional and contemporary settings.

Parker enjoys studying repertoire from both the jazz and classical canons and applies elements of both to his playing and teaching.