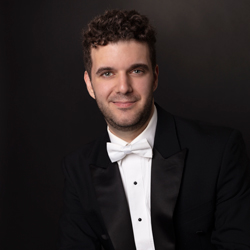 Matthew Campisi has enjoyed a versatile career as a tenor, pianist, and pedagogue. He is a recent graduate of the Eastman School of Music, where he earned a Master’s Degree in Vocal Performance and Literature. While at Eastman, Mr. Campisi performed the role of Mr. Plume in The Impresario, Tobias in Sweeney Todd, and was a member of the ensemble in Don Giovanni. He also performed the role of Orfeo in La Carnaval de Venise with Eastman Collegium. In the 2018-2019 season, was a featured tenor soloist in Haydn’s The Seasons with the Eastman-Rochester Chorale and Eastman Philharmonia. In the summer of 2020, Mr. Campisi was a member of the inaugural Tomita Young Artist Program at Finger Lakes Opera.

Equally passionate as a teacher, Mr. Campisi has taught in the Voice Department at Eastman Community Music School, in addition to maintaining a private studio. His students have received numerous local, All-State and All-National honors and have gone to other prestigious programs such as: New York University, Boston Conservatory, New England Conservatory, University of Southern California, Rider University, The Hartt School, and Ithaca. He also was the music director at Mercy High School in Middletown, CT from 2016-2018, where he built an award-winning choir program, and rejuvenated the music department.

Active in musical theater, Mr. Campisi has worked as music director in shows such as Les Miserables, Jesus Christ Superstar, Fiddler on the Roof, into the Woods, Legally Blonde, The Addams Family, West Side Story, Shrek, RENT, Chicago, South Pacific, Anything Goes and Grease (To name a few!)