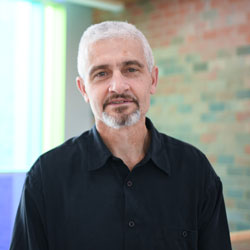 Kirby Trask is an Assistant Professor of Criminal Justice. His teaching areas of expertise include Restorative Justice, Crime Victims, Juveniles, and Corrections. Prior to teaching, Professor Trask served eleven years with the Genesee Justice Programs, a branch of the Genesee County Sheriff’s Department in Batavia, New York. Genesee Justice is one of a few governmental agencies in the United States doing applied restorative justice work within a criminal justice system.

Professor Trask is a past board member for the Finger Lakes Restorative Justice Center based in Henrietta, New York and an advisory board member for Employment, Consulting and Referral Advisors in Albion, New York. He also serves as an advisory board member for Project C.O.P.E. (Children of Prisoners Embraced), which is located in Rochester, New York. He has given numerous lectures on infusing the restorative justice philosophy into the traditional criminal justice system. Professor Trask holds an MA in Public Policy with an emphasis in law and criminal justice from Regent University in Virginia Beach, Virginia.

In addition to his regular teaching load, Professor Trask teaches First Year Seminar (FYS) and Senior Seminar for the General Education Department. He enjoys welcoming freshmen students in FYS and helping to set them up for success throughout their college experience. During Senior Seminar he likes the opportunity of helping students explore life after college.

He is a retired officer of the United States Army. He has been married 33 years to his beautiful bride, Sheryl, and has two adult children, Kirby, Jr. and Tucker. When not teaching he enjoys time with family and exploring God’s magnificent outdoor playground, mother earth.

1991-1993 | Master of Arts in Public Policy with an emphasis in Law and Criminal Justice Justice
Regent University, Virginia Beach, Virginia