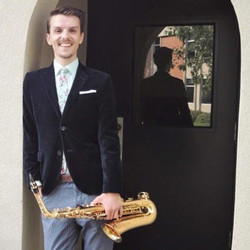 Collin formerly studied at Roberts Wesleyan College in Chili, NY, and earned a B.S. in Music Education, where he studied both classical and jazz Saxophone, classical and jazz piano as well as classical voice. Collin earned his M.M. in Jazz Performance at Eastman School of Music in May of 2020, where he taught Jazz Literature and Styles Analysis for Saxophone, and assisted in the Saxology Jazz Group. He currently teaches in Batavia School District at John Kennedy Intermediate School as the Band and Orchestra Director.