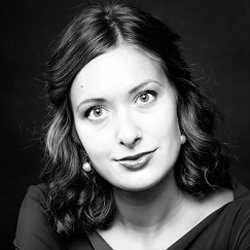 Caroline’s operatic roles include Maurya in Riders to the Sea, Dorothée in Cendrillon, the Abbess in Suor Angelica, the Madre superiora in Mese Mariano (Eastman), Nancy in Albert Herring, Mercédès in Carmen, Mrs. McLean in Susannah (Opera in the Ozarks), Dido in Dido and Aeneas, Cherubino in Le nozze di Figaro, Mother Marie in Dialogues of the Carmelites (Belmont), and ensemble in Pirates of Penzance (Nashville Opera). Furthermore, Caroline is an avid performer of chamber and choral music, having been a featured soloist in Bach’s St. Matthew Passion at Eastman, as well as in numerous cantatas, recitals, and new compositions.

Recently, Caroline was a featured artist in the 2017 Basically Beethoven Festival in Dallas, sponsored each summer by the Fine Arts Chamber Players. She is currently performing and teaching in Rochester and western New York.