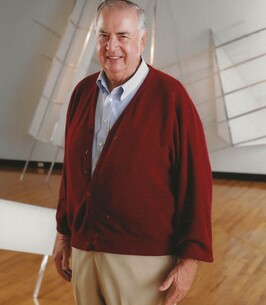 William Frederick Brunk'55, an alumnus and former employee of the College, passed away December 9th. He is survived by his wife of 68 years, Genevieve; son Robert (Debra) and son Doug (Vickie).

Bill’s life trajectory changed forever at the age of 16, when his father died suddenly when Bill was out swimming with friends. Days later, at the memorial service for Alexander Brunk, Merlin G. Smith, then-president of Roberts Wesleyan College, invited Bill to finish his high school studies at Roberts, which had a high school at the time. Bill accepted the offer, finished high school, and enrolled at Roberts and earned a bachelor’s degree in 1955.

Bill devoted his life to Christian Higher Education. He was an employee at Roberts Wesleyan College from the late 50’s through the 60’s and served as dean of men, dean of students, and ultimately becoming vice president of development and public affairs in 1967. Bill also worked for the University of Rochester and Asbury Theological Seminary, where he helped to orchestrate an eventual $68 million gift to Asbury from the estate of Ralph Waldo Beeson, a retired insurance executive.

One of Bill’s fondest memories of Roberts was his role singing high tenor in the Sacred Aires male quartet.  He, Don Frederick, Clyde Van Valin, and Bob Alfonso traveled to churches and campgrounds all over the Eastern United States sharing the gift of sacred music.

Donations can be made in his name to: