On Sunday, May 5, 2019, Roberts celebrated student-athletes and alumni at The Reggies.  The awards night recognized athletes, coaches, and our 2019 Athletic Hall of Fame inductees at a dinner in the Voller Athletic Center.  Students were commended for their achievements in competitive play, academic success and their service to the campus and greater community. 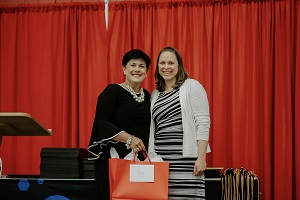 Joanna Patalano Farrell ’07 (Inclusive Childhood Ed.) and ’08 (Master of Education) was inducted for Women’s Basketball and Women’s Soccer.  A four-year starter in both sports, Joanna was the glue that held her basketball teams together during a number of coaching changes (Coach Williams, Coach Van Buskirk, and Coach Segave).

Despite missing a good portion of the 2005–2006 season, Joanna made 86 starts in her basketball career shooting 49% from the field, 34% from 3-point land, and 73% from the line.  She also grabbed 605 rebounds, dished out 191 assists, and made 161 steals, scoring 961 points over course of her career.  Her teams made appearances in the NAIA National Championship and the NCCAA National Championship.

Joanna is currently a Learning Specialist in the Pittsford Central School District and is responsible for teaching 3rd–5th grade students with special needs.  Joanna is married to Jon and is the proud parent of Connor and Emma. 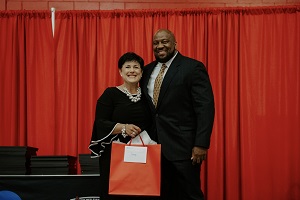 Kenny currently works for the YMCA in Newport News, Virginia as Operations Manager where he runs programs that support the Mission of the YMCA and leads the budgetary preparations and operations of the facility.  Kenny also completed an MBA at Columbia Southern University.

Kenny was joined by his wife Moniek and four close friends from his playing days at Roberts (Lawrence Lewis ’89, Dave Brown ’90, and Mike Doche ’91).  Kenny’s son, Amari, is a current member of the Redhawks Men’s Basketball team.  He has three sons (Andre, Ameer, and Amari).

Congratulations to everyone involved in The Reggies!