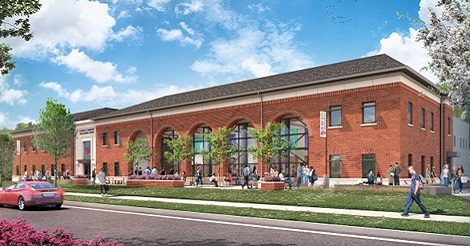 The Golisano Community Engagement Center, currently under construction at Roberts Wesleyan College, aims to create a bridge between higher education and the local business community by developing and serving the Greater Rochester area workforce.

The $15 million, roughly 25,000-square-foot center will house training programs including the college’s newly launched Community Institutes and provide easy access to career development and student life resources. It is slated to open at the start of the 2023 spring semester.

Deana Porterfield, Roberts Wesleyan president, said the center is envisioned to be a hub for connection, collaboration and student life resources.

It will be the first building on campus to provide a centralized meeting space and community interaction opportunities for all students — including traditional undergraduates, commuters, adult students and students with intellectual and developmental disabilities, she said, noting it also has its own parking lot.

The center’s concept came about after Porterfield met with Rochester business leaders about their employee training needs and what support the college could provide.

Among those needs for small- to mid-sized businesses was employee training in areas including public speaking, teamwork and business ethics, the latter of which is something Roberts Wesleyan is known for, she said. 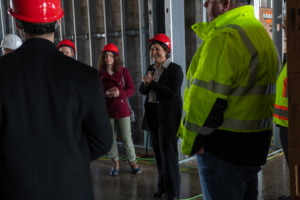 Alexander Jones, Robert’s vice president for institutional advancement, added that sessions can be tailored to fit a company’s needs, noting a goal is help businesses with their training efforts.

The fundraising response for the center has been well received, college officials noted.

The Connect the Community campaign to build the community engagement center began in August 2019 with a $7.5 million gift from Paychex founder and philanthropist Tom Golisano. The gift is the largest in Roberts Wesleyan’s 156-year history.

As of the first week of April, nearly 80 percent of the fundraising goal had been met through the ongoing fundraising campaign, with roughly $11.8 million raised.

Those leading the development of the project have also risen to the challenge.

The team at Home Leasing, the project’s construction manager, has been able to keep the project on budget and on time despite building during the COVID-19 pandemic.

SWBR, the project’s architect, has worked to incorporate a feeling of connectedness in the center’s design.

Ryan Zegarelli, a project architect with SWBR, said the two-story building was designed to incorporate collaboration and coworking opportunities with meeting spaces of varying size, as well as outdoor space with seating and patio fireplaces.

In addition to 3,000-square-feet of community space that can be divided for events and educational sessions, the center will house a café, career center, diversity and equity offices, a second-floor prayer chapel, offices and classrooms dedicated to international engagement and a digital forensic lab. 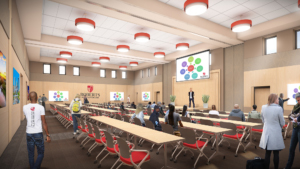 Carrie Starr, executive director of the Community Institutes, said the programs that the institutes offer give people an alternative to a four-year degree. That includes those who may be looking to sharpen their skills, or learn something new, in a shorter period of time.

She noted the creation of the Community Institutes is also timely, given that COVID-19 prompted many people to leave their jobs and try something new.

The Community Institutes have held virtual sessions on a variety of topics, from the role of human resources during the pandemic to running a successful bed and breakfast.

One area the institutes are focused on is helping people with their side hustles, Starr said.

She explained that many people are starting their own small businesses and may have questions related to setting up such ventures, such as those pertaining to insurance, whether they need to set up an LLC or the definition of, and requirements for, a B Corporation.

Starr plans to record live classes so people can listen to them asynchronously after the original class date and said there should be enough classes to start a subscription service by the fall. New classes will be offered monthly.

There will also be in-person trainings, workshops and retreats at the new center, as well as customizable courses, she noted.

Employers are also looking for such training programs, Starr said, noting that is especially true for soft skills training, such as listening, conflict resolution, managerial courage and character development.

“More employers are recognizing the benefits of bootcamps and trainings.” she said.

Link to Full Story at RBJ.net