Trumpet Virtuoso Allen Vizzutti to Perform at Roberts on 4/27 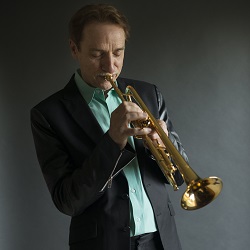 Seattle-based trumpet virtuoso, Allen Vizzutti will perform as the guest artist with the Roberts Wesleyan College Community Orchestra on Saturday, April 27, at 7:30 p.m. in the Hale Auditorium, located at 2301 Westside Drive, North Chili.

Vizzutti, considered one of the finest trumpeters in the world, will perform trumpet pyrotechnics and jazz favorites, accompanied by the Roberts Wesleyan College Community Orchestra. As a graduate of the Eastman School of Music, Vizzutti is committed to music education and teaching the value of music in everyday life, having taught statewide and internationally at the Banff Center for the Performing Arts, the Skidmore Jazz Institute, Ohio State University, the International Trompeten Akademie of Bremen in Germany and more.

Vizzutti has performed in more than 40 countries, appearing as a guest soloist at Carnegie Hall, NBC’s Tonight Show Band, and symphony orchestras in Tokyo, London, Germany and the United States. Adding to his repertoire, Vizzutti is also an established composer, having recorded several jazz and classical albums in addition to performing on more than 100 motion picture soundtracks and television shows.

Tickets to the performance are on sale now, starting at $19, and may be purchased at the Roberts Wesleyan College box office in person or online at roberts.edu/clc.