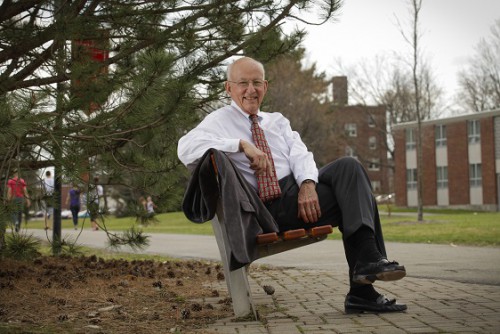 Well-known in the greater Rochester area for his entrepreneurial vision and amazing business mind, Norm created opportunities and contributed to the establishment and success of multiple enterprises which served many organizations, individuals and neighborhoods. In addition to serving on the Roberts and Northeastern Board of Trustees, Norm also served on the boards of University of Rochester, The Charles E. Finney School, Heritage Christian Foundation and Edgewood Free Methodist Church.

Norm, along with his twin brother, Nelson, co-founded Home Leasing Corporation. In 1994 they formed Home Properties of New York, Inc., a public company traded on the New York Stock Exchange. Norm was a board member and Chief Investment Officer of Broadstone Real Estate and Broadstone Net Lease, companies formed with his family in 2005 and 2006. Norm retired in 2016. 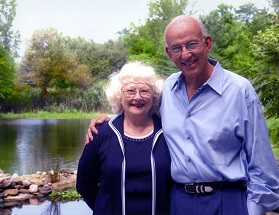 Norm and his wife, Arlene, have credited their philosophy on giving to the instruction of 2 Corinthians 9:7:  “Each person should give what he has decided in his heart to give, not reluctantly or under compulsion, for God loves a cheerful giver.”  David Roller, Free Methodist Bishop and current trustee of the College and Seminary, comments,

“Norm and Arlene are sterling examples of followers of Jesus who didn’t let money control them; they heard the admonitions of Jesus and obeyed them. They kept their lives right-side up. Everyone who knows them mentions their humility and their generosity. Isn’t that an amazing witness to their priorities?” 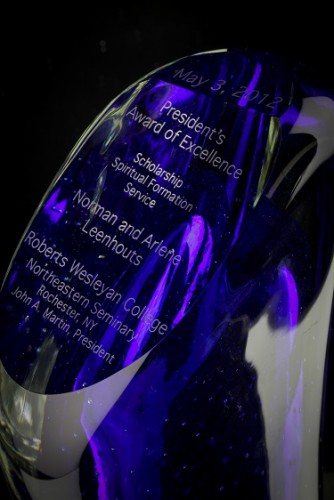 We have benefitted immensely from Norm’s generosity. During the presidency of William Crothers, Norm was an instrumental member of the team of leaders who envisioned and executed the launching of Northeastern Seminary. He received the Roberts Wesleyan College President’s Award in 1992 and in 1996 he was inducted into the Roberts Hall of Fame. Norm and Arlene Leenhouts received the President’s Award of Excellence in 2012, for demonstrating their commitment to excellence to Christian Higher education.

Norm was likewise instrumental in assisting with the investments for the College and Seminary, including the development of College Greene residences for seniors and a development fund to create additional living spaces for students on campus. Norm’s goal was to support scholarships and facilities that engaged exceptional students to attend Roberts Wesleyan and Northeastern. He faithfully served throughout the tenure of three presidents, cheerfully and willingly stepping into leadership roles, such as vice chair of the board and chair of the advancement committee.

We give thanks to God for Norm Leenhouts, who was a humble and faithful servant of our Lord Jesus Christ. He was a colleague and friend to so many in the community and an example for us all. Norm loved his family, Christian education and the community, but above all he loved the Lord, and he lived out that love in his daily life. Though we are comforted knowing he is now in the Lord’s presence, his absence here will be keenly felt.

Norm’s funeral service will be held on the campus of Roberts Wesleyan College on Sunday, January 15 at 2:00 p.m. in the Hale Auditorium of the Howard Stowe Roberts Cultural Life Center. Doors will open at 1:00 p.m. For those unable to attend, the service will be live-streamed, and can be viewed via this link. The campus flags will be lowered today through this weekend to pay tribute.

For those who wish to send cards of sympathy or comfort, please address them to Arlene Leenhouts and family, care of Patti Radel, Office of the President, 2301 Westside Drive, Rochester, NY  14624.

Update: You can view the entire service here.