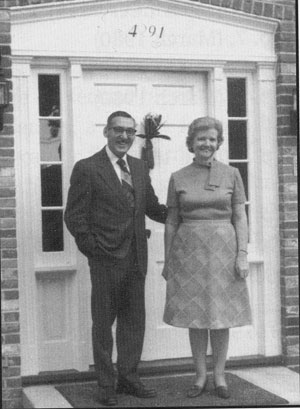 According to Jesus, in the Kingdom of God “anyone who wants to be first must be the very last, and the servant of all.” (Mark 9:35)  Jean Adams Morton was a First Lady of Roberts Wesleyan College, but she was also a servant; she spent her lifetime in service to God and to others.

Jean was born to the Rev. and Mrs. Wesley J. Parmerter on September 19, 1922.   Growing up as a preacher’s kid during the difficult years of the 1920’s and 30’s shaped the life and character of this spirited redhead.   In her own words, “They were ‘Depression Years,” but full of happy memories.  [My brother Stanley and I] enjoyed lots of fun times – scouting, roller-skating, trapping in a nearby creek (with Dad’s help), participating in local parades and building forts.  We sold strawberries that were grown in our own garden and picked by our parents for 10 cents a quart.”*

Later, as she worked her way through Chesbrough Seminary and Roberts Junior College as a housekeeper, office cleaner, and assisting Miss Sprague in the Library, Jean cheerfully accepted the discipline of hard work.  Perhaps because she grew up in a pastor's home, she implicitly understood the calling and ministry of working and serving throughout her lifetime.  Later, even as the wife of the president of Roberts Wesleyan College (1974-1981), she saw that work as part of her service to the college...and never thought it was beneath her to take direction from another employee.

Jean likewise exemplified the endurance and patience of a servant.  She waited patiently for WWII to end so she could marry Paul Adams, a fascinating musician and student of history, in January 1946.  She moved and established homes in a number of locations in order to serve alongside her husband in his varied ministries and professional career.  The Adams’ were blessed with four children.  Glenn, Charmain, Todd and Greg were brought up in a home vibrant with classical music, intellectual and spiritual curiosity, active church life, and political involvement.

As the wife of an academic dean, college president and state politician (Paul ran for governor of New York in 1966 and 1970), Jean exemplified a Proverbs 31 woman, who managed her world with dignity, grace and hospitality.  Her time, talent and resources were devoted to others in an ever-widening circle of family, friends, colleagues, ministry partners, and passing acquaintances.  Each benefitted from her gracious attitude, selfless giving and strong faith despite daunting challenges and limited means.   She noted, “As I look back, I can see how each task better prepared me for the next.  It wasn’t always easy, but so many memories come to mind.  The salary wasn’t great, but we never suffered–God always provided. “

Paul and Jean were together in life and ministry until his death in 1984.  When Dr. Adams died, she discovered and developed an amazing artistic talent; creating beauty and sharing it, even in her grief.  She moved back to North Chili so that she could better serve her family and church.  After being a widow for 13 years, a new chapter began for Jean, with marriage to Nelson Morton, who she described as “a very persistent and kind gentleman; a retired farmer.” Nelson predeceased her in 2005.

Four children, 13 grandchildren, 9 great-grandchildren; step-children and numerous nieces and nephews kept Jean occupied; still serving and giving until her last days.  Her large and busy family, however, were not her only focus of concern.  Kathryn Martin, wife of John, current President of Roberts Wesleyan College and Northeastern Seminary, remarks “Mrs. Morton always asked after our family...knew our kids and grandkids names and asked after each one specifically.  She was supportive of my role as wife of the President of the College and consistently assured me of her love and prayers.  On several occasions throughout our time here, she told me that she knew some of the burdens of a Presidential family due to her own experiences and that we could always count on her support.”

Jean bore the infirmities of aging with grace while maintaining a vigorous personality in an increasingly frail body. After her earthly lifetime of support, kindness, patience, hard work and devotion (the very definition of a servant) we can only imagine Jean’s great joy as she entered her rest and reward in heaven, as she passed peacefully from here to there on April 5, 2013.