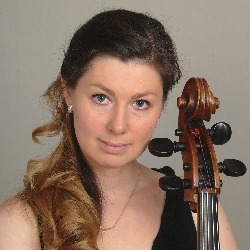 Svetlana Garitselov (Vasilyeva) was born in Moscow, Russia. She started playing cello when she was almost six, winning her first competition in Moscow Russia in 1995. In 1998, Svetlana entered the Gnessins College of Music. She received her Masters in Music from P. I. Tchaikovsky Moscow Conservatory. While there, she won the 8th International Maria Yudina Chamber Music Competition and was awarded a scholarship by I. K. Arkhipova. Also, from 2002-2005 Svetlana spent three summers in Germany, where she played chamber and solo concerts.

From 2003-2007 she worked as a principal cello in the Galina Vishnevskaya Opera center. In 2004, she traveled to Japan with the Chamber orchestra “Gnessinsky’s Virtuoso”, conducted by M. Khohlov, and took part in the numerous solo concerts. Svetlana worked as section cello in the Big Tchaikovsky Symphony Orchestra, conductor Fedoseev, from 2006-2007 and played recitals and concertos throughout Russia, Germany, Switzerland, Italy and France. Svetlana was one of the principal cellists of the Chautauqua music festival symphony orchestra in 2008.

In 2010 she received her second Masters in Music from Eastman School of Music while studying under Professor A. Harris. From 2011-2012 Svetlana was principal cellist at Odysseus Chamber Orchestra and had numerous solo and chamber concerts, while she was in Texas. In 2013 she has formed a Felice String Quartet (www.felicequartet.com) that performs in Rochester area. In addition, Svetlana holds a sub position at Symphoria (Syracuse Symphony Orchestra) and teaches students at Roberts Community Music School.

Her upcoming performances include solo, chamber music and orchestra appearances in the United States and Europe.