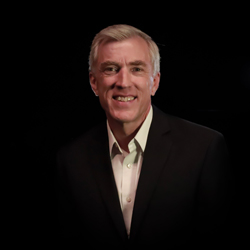 Paul Shewan, Interim Chair and Professor of Instrumental Studies, teaches conducting and trumpet, and directs the wind ensemble, orchestra, and brass ensembles.  Dr. Shewan earned his Bachelor of Science degree (Music Education) from Roberts Wesleyan College, and his Masters (Trumpet Performance and Literature) and Doctorate (Conducting) from the Eastman School of Music.

Dr. Shewan has conducted performances for live public radio broadcasts on the Music at Midday from Roberts Wesleyan College and as soloist and conductor on the Live from Hochstein concert series (WXXI FM Radio). He has recorded as trumpet soloist and conductor for Albany Records including Randall Thomson’s Frostiana for chorus and orchestra, and Ron Nelson’s Te Deum for chorus and band with the RWC Chorale and Wind Ensemble. Mr. Nelson referred to the latter as a “jaw dropping performance” and declared it to be the definitive recording. Dr. Shewan has over 40 video and audio YouTube recordings of solo trumpet, conducting and trumpet tutorials, and trumpet with piano or organ. He is recently published in “The Conductor’s Companion” (compiled and edited by Gary Stith, Merideth Music Publications, 2017).

Dr. Shewan has guest conducted the Air Force Bands of Liberty (Boston) and Heritage of America (Virginia) and has conducted several high school district and regional music festivals. In 2009, he conducted the Syracuse Symphony Youth Orchestra and was the guest conductor for the Rochester Philharmonic Youth Orchestra (RPYO) in 2014. In the summer of 2012, he was guest conductor with the wind ensemble, Concordia Santa Fe (New Mexico). He is also the conductor of the RWC High School Honors Band Festival. Each summer he spends two weeks conducting the high school orchestra at the Csehy Summer School of Music. Prior to coming to Roberts Wesleyan College, Dr. Shewan taught instrumental music for five years in the Holland, NY Central School district. He and his wife Joy have four grown children and four grandchildren.