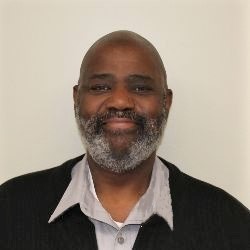 Born in Sumter, SC, Julius C. Dicks showed a love for music at an early age, playing the piano for local churches while still in elementary school. He attended Clark University in Atlanta, GA, then traveled to Rochester, NY to continue his education at SUNY Brockport, graduating with a BA in Music Theory.

A long-time friend, William Crimm, introduced Julius to Pastor Clarence C. Gavin and the First Genesis Baptist Church, where he started out as the church’s musician. Since that time, Julius has served as Minister of Music at several churches in the Rochester area and is currently serving in that role at Baber AME Church. Known locally as ‘The Maestro,' Julius maintains a respect and on-going relationship with many churches and musicians in the Rochester area. He strives to nurture others, sharing his many talents and gifts sincerely and without reservation.

Julius does not compromise or relent in his quest to bring out the best in each voice and choir. His dedication is evident in every service, concert, and program that he partakes in. A perfectionist and enthusiast of Black gospel music, he has introduced and instructed choirs in various styles of sacred music; including hymns, spirituals, traditional & contemporary gospel, and praise & worship songs.  His selection of material is always spiritually uplifting and inspirational. You can’t doubt that he has a vested interest in how God’s gospel is sung. He ignites voices, choirs, the organ, and the hearts of God’s people to a jubilant rejoicing.

Among his many accomplishments, Julius is a well-known musician throughout the United States. He has had the privilege of recording albums with several well-known artists. He has further demonstrated his musical versatility by assisting and producing various dramatic and musical productions in the Rochester area.

Proud parents of a son, Frederick, and a daughter, Jillian, Julius and his wife Josephine (Penny) also enjoy spending time with their grandchildren.