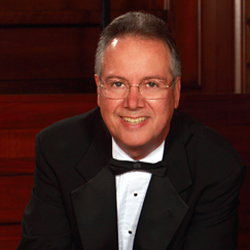 Joseph Werner enjoys a varied career as a soloist, collaborative artist, orchestral pianist, administrator, and educator. He has been the Principal Pianist for the Rochester Philharmonic Orchestra since 1975 and was the orchestra’s Personnel Manager from 1993-2017. He was also Co-Artistic Director of the Society for Chamber Music in Rochester from 2000-2013. He currently serves as Director of Piano Studies at Roberts Wesleyan College and Co-Chair of the Piano Department at the Hochestein School in Rochester.

Mr. Werner has performed numerous times with the RPO in concerto repertoire ranging from Bach to Gershwin with conductors David Zinman, Mark Elder, Christopher Seaman, Jorge Mester, Peter Bay, Isaiah Jackson, and Enrique Diemecke. He has also been the featured soloist with the Buffalo Philharmonic Orchestra, Rochester Chamber Orchestra, North Jersey Philharmonic, University of Rochester Symphony Orchestra, and the Penfield Symphony. One of the busiest collaborative pianists in Rochester, he was the accompanist for the celebrated American violinist, Carroll Glenn, for many years, and performs regularly with a host of RPO soloists, Eastman School of Music faculty, and visiting artists. He has toured across the United States with former RPO Principal Trombonist and Professor of Trombone at the Eastman School of Music, Mark Kellogg. He has performed with international flute soloists Carol Wincenc, Per Öien, Alexa Still, Marianne Gedigian, Wissam Boustany, and James Walker. In the fall of 1997, Mr. Werner joined W. Peter Kurau, Professor of Horn at the Eastman School of Music and Principal Horn of the RPO, for a three-week tour as Artistic Ambassadors for the United States Information Agency. They presented concerts and workshops of American Music in Serbia-Montenegro, Macedonia, Kazakhstan, and Syria.

A champion of new music, Werner has premiered works by such distinguished composers as Verne Reynolds, Libby Larsen, Erik Ewazen, James Willey, Lorenzo Palomo, and David Diamond. An active recording artist, Mr. Werner’s recordings can be found on the Columbia, Vanguard, Musical Heritage Society, NEXUS, and Naxos labels. Most recently, he has recorded an album of French music for trombone and pi- ano with Mark Kellogg entitled “Impressions” and the world premiere of “Blue Windows”, a sextet for winds and piano written for him and the Antara Winds by the celebrated American composer, Libby Larsen. He has recorded Bill Cahn’s “In Ancient Temple Gardens” with Robert Becker, the world-renowned percussionist from the NEXUS ensemble, and his recording of the Four-Hand Piano Music of Louis Moreau Gottschalk with the late Eugene List won High Fidelity Magazine “Critics’ Choice Award”.

Mr. Werner is a graduate of the Eastman School of Music, where he earned both Bachelor’s and Master’s Degrees and the Performer’s Certificate. His teachers have included Eugene List, Brooks Smith, Leon Fleisher, and Rosina Lhevinne. He won the first Faculty Service Award at the Hochstein School in 1990. He was named Mu Phi Epsilon’s “Musician of the Year” in 2007 and RPO’s Musician Volunteer of the Year in 2017. He resides in Penfield with his wife, flutist Diane Smith.