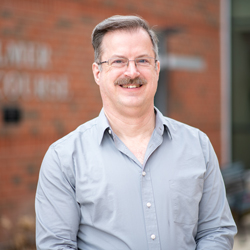 Doctor of Philosophy in Mathematical Sciences,
State University of New York at Binghamton

Master of Arts in Mathematical Sciences,
State University of New York at Binghamton

“ The heavens declare the glory of God, the skies proclaim the work of His hands. ”
About Dr. Raduns

Professor Raduns enjoys most things mathematical.  His particular interests are analysis, probability, and matrices over commutative rings.  However, plan to spend a few extra minutes in his office if you ask about graph theory, fair division, or voting.  When he isn’t occupied with activities related to teaching or learning mathematics he enjoys playing musical instruments, golfing, bowling, gardening, or just relaxing with his family.

Gary and his wife, Cheryl, have two children.  They worship together at Grace Church of the Nazarene where Gary plays bass guitar and has various lay leadership roles.

Raduns, Gary and Wofgang Kappe.  “Determinants and Zero Divisors in Rings of Matrices.”  A contributed paper presented to the Seaway Section Meeting of the Mathematical Association of America, Ithaca, NY, April 2006.