Home - Undergraduate - Majors and Programs - Spanish - What Our Grads Say

What Our Grads Say 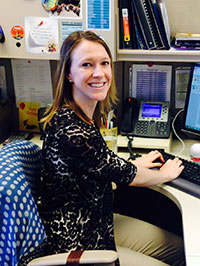 I graduated with a dual major in Spanish and Marketing. My love for Spanish was a progressive development. It started with a mission trip to Costa Rica right out of high school. That trip sparked my interest in travel and my desire to study abroad for a semester, so for that reason alone, I chose to take Spanish in college. However, instead of going to Costa Rica, I ended up studying in Spain, and it was phenomenal – hands down, the best and most influential five months of my college career! When I came back, I had fulfilled all of the credits necessary for a Spanish minor. However, I was so hooked with the language and the opportunities it could provide that I changed my minor to a major and kept on going. I have to say that it was the best decision I could have made because I am where I am today because of it.

The job interview was held in Spanish. Now I have been with PAHO/WHO for over two years, and I use Spanish on a daily basis, working with countries all over Latin America and the Caribbean. I even have the opportunity to travel at times. I set up a conference in Argentina and went to Haiti to support a vaccination campaign. Next year I’ll be holding a conference in Panama. Duty travel (as it’s called) is wonderful.

I would encourage anyone interested in the language to pursue the interest and not let it go. Although it may be difficult at times, you’ll be reaping benefits for life. It will not only make you more desirable in today’s competitive job market, but it will also open your mind, influence your world view, and broaden your opportunities.

I currently work for U.S. Citizenship and Immigration Services as a Bilingual Writer/Editor translating English to Spanish.
The Spanish program at Roberts Wesleyan College gave me the opportunity to study abroad in Ávila, Spain where my love for Spanish started. The guidance and support I received from Professor Villodre was instrumental in my success and ultimately led me to return to Madrid, Spain and pursue a Masters in Spanish Literary Cultural Studies and Linguistics at New York University.