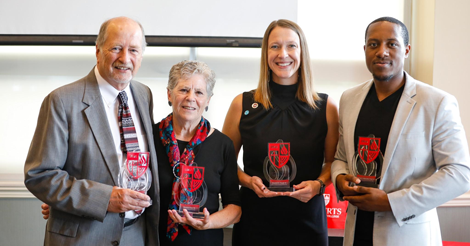 Each year, we honor alumni who make a significant impact in their community and profession. The alumni chosen for these awards are recognized for their professional excellence, service to community, and lifestyle that promotes the spirit and mission of Roberts Wesleyan University.

The Alumni Department at Roberts annually recognizes  honorees who represent the best of a Roberts education and experience. These outstanding alumni, along with the thousands of Roberts Wesleyan University alumni, are making a difference and providing leadership in our world and culture. We formally recognized and celebrated these honorees on Sept. 21 during Homecoming week.

Congratulations to the 2022 Alumni Award Recipients 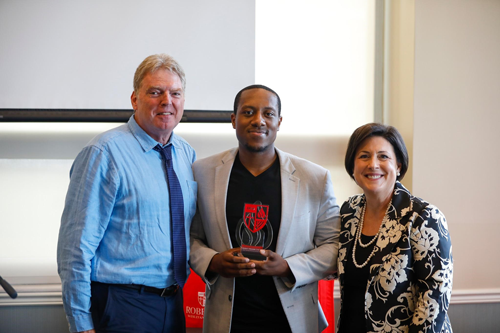 As a student: He was an athlete and three-year captain of the Roberts Wesleyan Men's Basketball Team, worked in facilities in building care, and was the first president of the Student Multicultural Advisory Council. Herb also served as a coach for Elev8 Enactus Project, Coach of the Men’s Basketball Team, and Graduate Assistant for Multicultural & Leadership Affairs.

Herb served on the Multicultural Advisory Board, Director of Multicultural Student Success, was the First Director of Diversity & Equity, Associate Dean of Students, Chief Diversity Officer and more. He will begin his term on the Board of Trustees beginning this October.

In his work: As Chief Diversity Officer for Cayuga Health System, his role is to foster an environment of workplace equity, belonging, and inclusion for all employees. This is done through education, mediation, policy creation, and more. He is also a champion for health equity in his community; working to create and support initiatives that address the health disparities in society. 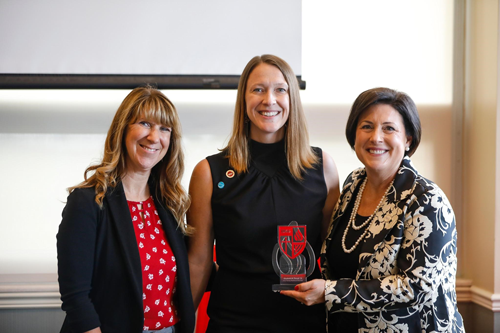 As a student: She was a Resident Advisor (RA), member of the Spanish Club, studied abroad in Murcia, Spain and traveled to Guatemala with the SIFE/Enactus team. She was the Director of Marketing for SIFE (Enactus) and was on the SIFE presentation team for two years winning regionals and advancing onto the semi-finals in the national competition finishing in the top 20 in the nation in 2010.

In her work: Liz supports the United Nations Foundation immunization and broader global health portfolio. Specifically overseeing $4.5 million of immunization grants annually to UNICEF and the World Health Organization, providing advocacy, communications and resource mobilization support for the Global Polio Eradication Initiative (GPEI). She volunteers for WGIRLS D.C. chapter, which aims to empower women and children in the Washington D.C. community.  She manages the Trichur Project with the United Church in Washington D.C. which provides financial assistance to students at the Chaldean Syrian Higher Secondary School (CSHSS) in Trichur, Kerala, India.

As a student: Mike was a three-sport athlete; in soccer, basketball, and tennis. He served as a player and coach for tennis during his senior year. Mike earned numerous awards for each sport, was MVP for all three sports his senior year, and earned the Men's Senior Athlete Award.  Mike worked in the mailroom and half days at Bausch + Lomb senior year while keeping up with courses and sports.

In his work: Mike taught physical education skill and minor courses, over the years coached men’s basketball (three years as head coach), men’s soccer (10 years), women’s basketball (10 years), tennis (10 years) and as Athletic Director, managed the Athletic Department.  During his leadership, Mike oversaw the building of the stadium and track and the transition from NAIA to Division II Athletics.

As a student: She was a Cheerleader for 4 years and received the Anne Schmallfuss Cheerleading award senior year. In addition to her two years of intense clinical experience, Bev was a class senator, worked in the library and served as a RA during her junior and senior years at Roberts.

In her work: In addition to her clinical responsibilities as a Senior Advanced Practice Nurse at the University of Rochester , she also obtained two NYS Health Department grants that allowed her to improve the care of children with diabetes within the Rochester City School district. With the help of the nutritionist they developed a family healthy eating and exercise program that they ran out of several of the area YMCA branches. During her career in pediatric diabetes, she was active in the American Diabetes Associates, and served as the local board chair for several years as well as the state board. 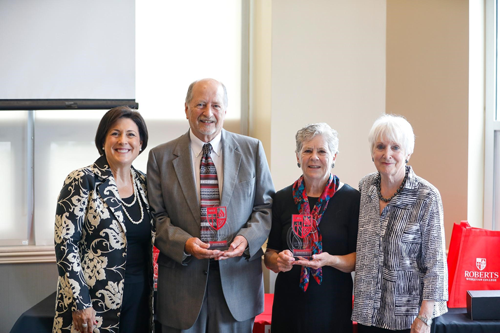 Together: Mike & Bev housed 10 Roberts students in their home, only one was from the United States—others were from Jamaica, Kenya, Argentina, Trinidad, and Scotland. They have been active members of Pearce Church since they attended Roberts, serving in various leadership roles over the years.