Lucretia Henry Richter (12/28/22 – 10/17/86) was born and raised in Arkansas. As a child, she learned to anticipate and cope with the severe storms and tornadoes that menace the southern states. Throughout her life she sited that early experience as preparing her to face the inherent dangers and challenges of life, which she did with anticipation, knowledge, and reason. She is known for her innovative, well-planned initiatives that addressed a number of unmet needs she encountered in her professional nursing career.

Lu graduated from Ouachita Baptist University of Arkadelphia, AK and the Johns Hopkins School of Nursing. Her marriage to Dr. Goetz Richter resulted in a rich blend of intellectual compatibility, love of music and outdoor activity, and an enduring companionship of forty years. The Richters were blessed with three children – Jim, Elizabeth, and Marianne, who have each entered various professional fields.

In the 1940’s and 50’s, Lu, working in community health in New York City while Goetz completed a residency in pathology, organized and provided health care services for poor African Americans in Harlem. Moving to Rochester in the 1970’s, she joined and became active in the local League for Nursing. In response to a need for more professional nurses in the late 1970’s, Lu developed a successful seven county program called “Project late Start”, designed to recruit women into nursing as a second career. As president of the local League for two terms, Lu also developed a program to recruit minorities into nursing.

In 1980, Lu researched and developed a local state board review course. For six years she successfully administered this program to the benefit of new graduates.  Now a common support for graduate nurses taking their licensure exams, a review course of this nature was an important innovation at that time.

During that same time period (1970 and early 80’s), Lu joined the nursing faculty at Roberts Wesleyan College and put her nursing knowledge and engaging interpersonal skills to the work of molding and inspiring numerous students who practiced nursing with compassion, integrity, and expertise.  One of her students from that time remembers Lu’s admonition, “We expect big things from you!”  That student did go on to become a leader in nursing education.

In the community Lu worked as a literacy volunteer, and she chaired the Peace Committee of the Third Presbyterian Church to increase public awareness of the threat of nuclear war.

Lu has been described as a “powerful force for good”.  Her many contributions to nursing and health care were guided by her keen awareness of the dangers facing civilized society.  Her gentle manner often belied a fierce strength of purpose and control over difficult events.  Unfortunately, Lu’s love the outdoors may have led to her diagnosis of skin cancer in the 1980’s; she believed that driving around with the window down during her days as a community health nurse caused the malignant melanoma to start on her left arm.  She approached her cancer as she did the rest of her life, with anticipation, planning, commitment, challenge, and control; they were the sustaining values that made her dying at home possible.  Her family and many friends were able to continue sharing their bond with her until her death. 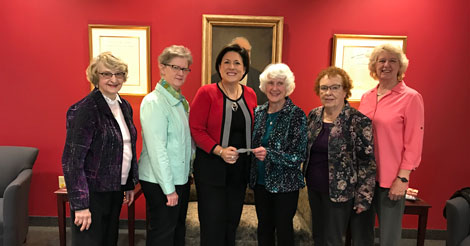 The nursing scholarship, now known as the Lucretia Richter Memorial Scholarship Fund originated in 1983 with a one-time Shering Award of $1000 from the National League for Nursing (NLN) to be administered by the Western New York League for Nursing. This award precipitated the idea with a local group of nurses of granting more scholarships to deserving nursing students.  Two years later this group was able to award more scholarships, and the awards became an annual event. The scholarship thus established was named the Lucretia H. Richter Scholarship in June of 1986 to honor her life’s work in nursing.  In 2004, as the role of the NLN changed, the Lucretia H. Richter Scholarship was incorporated separately so that Lu’s legacy could continue locally.  With the fund-raising efforts of local nurses and the generous support of Dr. Goetz Richter over the years, the annual scholarship continued until 2021 with well over $115,000 being awarded to deserving nursing students.  In 2022, the remaining principle of the fund was donated to Roberts Wesleyan College to continue as the Lucretia Richter Memorial Scholarship benefitting nursing students of the future.