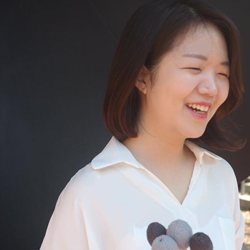 
YoungKyoung Lee is a percussionist who specializes in solo and chamber music performance. She has performed in various countries such as Japan, Korea, United States of America, Canada, and Spain as a soloist and chamber musician.

She completed the Bachelor of Music studying with Tom Freer, assistant principal timpanist and percussionist of Cleveland Orchestra, and the world-renowned contemporary musician Robert van Sice at the Peabody Conservatory. While at Peabody, YoungKyoung was the recipient of the Zildjian Scholarship. She continued her studies with Robert van Sice at the Yale School of Music and pursued Masters of Music and Masters of Musical Arts in Percussion Performance as a recipient of the Stephen and Denise Adams, and the Henry and Lucy Moses Scholarships.

YoungKyoung is currently based in Rochester, NY, pursuing Doctor of Musical Arts at Eastman School of music.