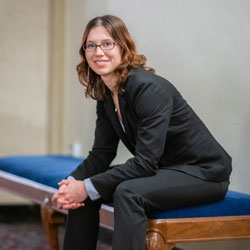 Born and raised in Spencerport, Tierney McLean has lived to serve through music since she began playing trumpet as a child. Awarded the Spencerport Music Association Scholarship upon her high school graduation in 2011, she moved to Ohio to pursue a Bachelor’s Degree in Trumpet Performance at the University of Cincinnati College-Conservatory of Music under the instruction of Alan Siebert and Philip Collins. There she was awarded numerous merit scholarships, as well as being named a winner of the International Trumpet Guild Conference Scholarship Competition in 2013. That summer she won an internship at the Wagon Wheel Theater in Warsaw, Indiana. She returned for a total of three consecutive summer seasons, and over one hundred performances of a dozen shows.

Tierney began her Master of Music Degree in Trumpet Performance and Literature in 2018 at Eastman. There she taught the undergraduate Trumpet Methods course, and was nominated for the 2019-2020 Teaching Assistant Prize for her work. Additionally, she pursued a Certificate in Arts Leadership from the Institute for Music Leadership, and oriented her classwork to align with the goals of community teaching and arts administration. She graduated in 2020 after performing one of the last degree recitals of the year.

Locally, she has performed with the Rochester Philharmonic Orchestra, Syracuse Symphoria, Finger Lakes Opera Company, Greater Rochester Women’s Philharmonic, South Seneca Music Festival Orchestra, Finger Lakes Symphony Orchestra, and the Center Stage Pops Orchestra. She also does a great deal of teaching, all of which she maintained during her time at Eastman: she mentors adult students through Eastman’s New Horizons program, and directs the Antique Brass ensemble. Outside of teaching and
playing, she maintains an active role in the larger musical community as the personnel manager of the Center Stage Pops Orchestra, and is very grateful to have the opportunity to give back to the musical community of both Roberts and Rochester.