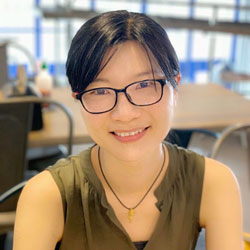 Taiwan-born guitarist, Shiuen-Huang Suen has established herself as both a dedicated teacher and active performer. She has held a variety of professional positions, working as a guitar instructor at Finger Lakes Community College and Hochstein School of Music, and as a general music teacher at Grace Covenant Christian School. She currently maintains a studio of private students. Throughout her professional career, Shiuen has performed in solo recitals and chamber concerts throughout the USA, Taiwan and China. She especially enjoys working with other instrumentalists including violin, flute and string quartet, and playing not only in the concert halls but also in intimate settings such as nursing homes and hospitals.

Shiuen began music studies at the age of 6, and attended the National Taiwan Academy of Arts, with a major in guitar and a minor in piano. She achieved a number of accolades in solo competitions, including first prize in the Taiwan Classical Guitar Association Competition and second prize in the National Music Competition of Taiwan. She holds a Master of Music and Doctor of Musical Arts in Guitar Performance at the Eastman School of Music where she studied with Nicholas Goluses. Throughout the years at Eastman School of Music, she received the Babcock scholarship, and an Andrés Segovia Award for Musical Accomplishment and Human Endeavor. Shiuen lives in Webster, NY with her husband and their two children.