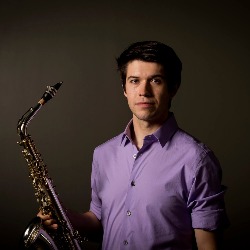 Matthew Amedio is the newly appointed professor of saxophone at Houghton College's Greatbatch School of Music. In May of 2016, Amedio graduated from the Eastman School of Music with his Master's degree in saxophone performance and literature, under the tutelage of Professor Chien-Kwan Lin. While working towards his Master's degree, Amedio served as a graduate teaching assistant at Eastman coaching saxophone quartets, teaching lessons to non-majors, as well as teaching the saxophone methods course to music education majors. Previously, Matt attended Northwestern University for one year studying under Dr. Timothy McAllister. While at Northwestern, Matt was the principal saxophonist of the prestigious Northwestern University Wind Ensemble, and soprano saxophonist of the Northwestern University Saxophone Ensemble. Prior to attending Northwestern, Matt earned a dual Bachelor’s degree at the Eastman School of Music in saxophone performance (under Professor Chien-Kwan Lin) and music education (under Professor Richard Grunow). During his undergraduate at Eastman, Matt performed with the Eastman Wind Ensemble and Eastman Symphony Orchestra as principal saxophonist, and was a founding member of the Eastman Saxophone Project, “ESP”--the first conductor-less saxophone ensemble in the United States to perform completely from memory. Matt also earned the John Celentano Award for chamber music excellence as well as a Performer’s Certificate at Eastman, the highest distinctions awarded at the conservatory. Matt has performed throughout the United States, as well as in China, Canada, France, Germany, Salzburg, and the Czech Republic, in venues ranging from the stage of the Eastman theatre in Rochester, NY, to the Rudolphium in Prague, Czech Republic.

As a dedicated chamber musician, Matt currently holds the alto saxophone chair in Project Fusion and the tenor saxophone chair in the East End Saxophone Quartet. As a member of Project Fusion, Matt won consecutive top prizes in the Fischoff, Plowman, Music Teachers National Association (MTNA), Coleman, Arriaga, and North American Saxophone Alliance (NASA) competitions. In 2015, Project Fusion was selected as a winner of Astral Artists national auditions, and as a result have been very active as both recitalists and clinicians in the Philadelphia area. Performing as the tenor saxophonist in the East End Quartet, Matt has won 1st prize in the Music Teachers National Association Competition (MTNA) as well as the Chamber Music Yellow Springs Competition, becoming only the second saxophone quartet to secure this coveted prize in the competition's 30 year history. Always striving to enrich community life, East End has performed numerous recitals and outreach concerts throughout the Northeast, and have their debut album set to release in the Fall of 2016.

In 2012, Amedio was named the 1st prize winner in Vandoren's Emerging Artist Competition, which resulted in his Paris debut. Most recently, his international travels have brought him to China, where he was a featured soloist with the Eastman Saxophone Project. While on a two week tour with the ensemble, Amedio performed Jonathan Russell's "Double Concerto for two bass clarinets," alongside studio mate Jon Wintringham, in Shanghai, Beijing, Jinan, and Ningbo. Stateside, Amedio has been seen performing with the New World Symphony in Miami, FL under the baton of Michael Tilson Thomas, and performing in masterclasses throughout the country being led by Claude Delangle, Vincent David, Timothy McAllister, Lynn Klock, Carrie Koffman, Chien-Kwan Lin, and the XASAX saxophone quartet.