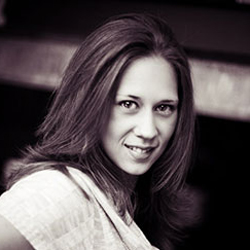 A dedicated teacher, Pritchard holds faculty positions at Roberts Wesleyan College and Finger Lakes Community College, as well as maintaining an active private teaching studio. In 2005, she co-presented a clinic at the Percussive Arts Society International Convention in Columbus, OH. In addition to performing, Pritchard has kept her eye on the mounting diversity and complexity of a career as a musician. She held a Development position with the Rochester Philharmonic from 2003-2010 and worked as a casual announcer for WXXI, Rochester’s public radio station.

Pritchard holds degrees from Northwestern University and the Eastman School of Music, where she was also awarded the prestigious Performers Certificate and was named a percussion scholar by the Avedis Zildjian Company. Her teachers have included Michael Burritt, James Ross, Joel Spencer and John Beck.