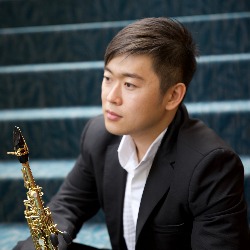 Jiaqi (Kevin) Zhao is currently a Doctorate student at Eastman School of Music, majoring in Saxophone Performance and Literature with Dr. Chien-Kwan Lin. He also received his Bachelor’s degree at Eastman and pursued his Master’s degree at University of Illinois at Urbana-Champaign (UIUC) under professor Debra Richtmeyer.

Kevin was born in Jinzhou of Liaoning Province in China and began studying piano from his mother at age four. He started learning saxophone at age seven and at twelve, was admitted to the Middle School attached to the Central Conservatory of Music of China. During his studies, Kevin became principal saxophonist in the Youth Band of China and gave his first solo recital when he was a sophomore in high school. Kevin is also an accomplished pianist and won prizes for both piano and saxophone during his high school years, such as 3rd Prize in the CADANZA Piano Competition (2007), 2nd Prize in the Beijing Music Festival Piano Competition (2009), and 3rd Prize in the International Woodwind Competition (2009).

During his college and graduate years, Kevin won 1st Prize in the LISMA Woodwind Competition (2013), 2nd Prize in Vandoren Emerging Artist Competition (2015), Finalist in North American Saxophone Alliance Solo Competition (2016), and 4th Place in the 5th Jean-Marie LONDEIX International Saxophone Competition (JLMISC) held in Bangkok (2017). He also won Eastman’s concerto competition as a junior and performed the Rhapsody by Andre Waineign with the Eastman Graduate Orchestra. During the second year of his master's degree, he became a winner of the Concerto Competition at University of Illinois at Urban Champaign and was invited to play Concerto by Henri Tomasi with University of Illinois Symphony Orchestra in October, 2017. Kevin has played in masterclasses for Griffin Campbell, Claude Delangle, Otis Murphy, Timothy McAllister, Kenneth Tse, Carrie Koffman, Nikita Zimin, and Jean-Michel Goury during his study at both Eastman School of Music and University of Illinois.

As a chamber musician, Kevin consistently plays in saxophone quartets as well as the Eastman Saxophone Project (ESP). Together with the Finja Saxophone Quartet at Eastman, Kevin won 1st Prize in the 198th Army Band Ensemble Competition (2013) and 1st Prize in the MTNA National Wind Chamber Music Competition (2014). While at UIUC, the Aegean Quartet has shared the stage with the Illinois Wind Orchestra at Krannert Center, was invited to record a video to represent the saxophone studio, and performed in many composition faculty recitals. A member of the Eastman Saxophone Project for four years, Kevin performed in many places, including the Kennedy Center in Washington, D.C.