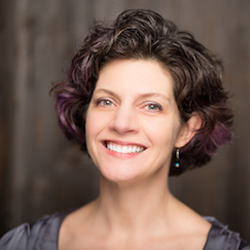 Teaching the double bass to students of all ages has become a significant part of Ms. McCormick’s life. In addition to teaching at Roberts Wesleyan College, she joined the faculty of Nazareth College in 2010 and has been the bass instructor for the Eastman Community Music School since 2001.  She enjoys working with talented high school-aged string players in the summer at Eastman’s Music Horizons program, where she teaches chamber music and gives bass lessons.  In 2003, she was invited to teach for the year at Duquesne University’s City Music Center, a program for talented pre-college students. Ms. McCormick has given master classes and recitals at Ithaca College, Williams College, the College of St. Rose, and Roberts Wesleyan College. In 2013, she gave classes on double bass technique at both the International Society of Bassists convention in Rochester and the NYSSMA Winter Conference. “Mastering the Bow," the first of three books on double bass bow technique, was published by Carl Fischer in 2013, and the second was published in 2014.

Playing chamber music has been a passion for Ms. McCormick.  Before moving to Rochester, she often performed with the St. Cecilia Chamber Orchestra (Albany, NY) as their sole bassist.  During her tenure in Pittsburgh, she became the founding bassist of the Pittsburgh Live Music Chamber Orchestra. She was the founding member of the innovative string quintet Gibbs and Main and with them recorded a CD of tango standards, as well as commissioning a new work for the ensemble by Judd Greenstein.   Over many summers, she has been performing with the Music in the Mountains chamber orchestra, a festival based in Durango, Colorado. She is frequently invited to play chamber music with musicians from around the country in festivals such as the Roycroft Chamber Music Festival, the Syracuse New Music Ensemble, and the Canandaigua Lake Chamber Music Festival. A recent career highlight was spending a month in Paris studying with iconic bassist and pedagogue Francois Rabbath.

Ms. McCormick has been involved in volunteering and arts advocacy and is proud to be the representative for the RPO in the International Conference of Symphony and Opera Musicians. She is honored to be a member of Phi Kappa Phi and Pi Kappa Lambda, groups recognizing and supporting excellence in the humanities and in music specifically. In her spare time, Gaelen enjoys kayaking, Argentine tango and West Coast swing dancing, and spending time with her daughter Clara.