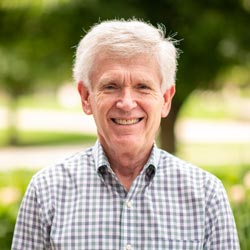 Dr. David Basinger is the vice president for academic affairs, chief academic officer, and professor of philosophy and ethics at Roberts Wesleyan College. Most of his research centers on issues in the philosophy of religion, with a current focus on religious diversity. Much of his public speaking focuses on ethical decision-making into today’s world, with an emphasis on bioethical issues. Dr. Basinger also has a strong interest in opening the college setting for students with intellectual disabilities. He was one of the founders of Roberts’ Bridge to Earning, Learning, and Living (BELL) program, a federally-approved program that allows students with intellectual disabilities to engage in the types of academic, social, and vocational activity that will enhance their personal lives and better prepare them to be engaged community members with gainful employment.