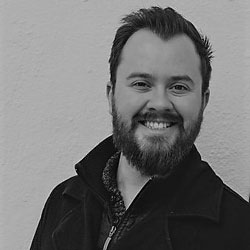 Guitarist Dan Cooper, a native of Rochester, NY, is an alumnus of Roberts Wesleyan College (BA Music) and Stephen F. Austin State University (MM Music Composition and Theory). A dedicated student of music, Dan has had the privilege of studying guitar under Dr. Timothy Shannon during his undergraduate time and then with the virtuoso electric-guitarist Nili Brosh (Cirque du Soleil, Tony MacAlpine Band, Danny Elfman, Dethklok, and soloist) for two years.

Through a partnership with Southern Methodist University, Dan was one on of the composers who worked on the video game Space Smack! (available on Steam). His thesis Escape Beneath: an Original Game Score Inspired by an Analysis of Garry Schyman’s Music combines analysis and original compositions for the upcoming video game Escape Beneath.

A guitar teacher for over a decade, Dan has been able to cover a wide range of styles with his students for all skill levels while stressing both musicality and technicality.

The continuous differences in styles and levels of students always make his teaching days interesting and enjoyable. Currently teaching at the Roberts Wesleyan College Community Music School, he also taught for a period at the Rochester Academy of Music and Art before moving to Los Angeles. While in Los Angeles, Dan continued to be dedicated to his private students back in Rochester by teaching them regularly over Skype.

An active performer, he considers himself blessed to have worked with fantastic musicians throughout Rochester and Los Angeles. Outside of solo performances, some of his other shows and work include: ConArtist, Powerslave, Best Ever Productions, Vanessa Bejine, Speirs, RnB Classics Live, The Father’s House Church, Mosaic Church, Pino Gioia, pit orchestras, and more. The stage and studio are like second homes.