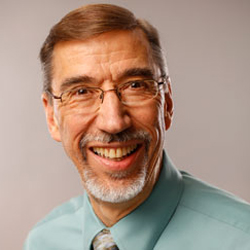 Dr. Daniel Barta has been Professor of Music Theory and Composition since 2007. From 2013-2021, he served as Chair of the Department of Music and Performing Arts. Under his leadership, the BS in Music Therapy became the department's fourth degree program. From 1994-2007, he was Chair of the Theory and Composition Department at Cairn University. Dr. Barta holds the B.Mus., M.Mus. and DMA in Composition from Temple University, where he studied with Clifford Taylor, Maurice Wright and Matthew Greenbaum.

Barta's portfolio includes compositions in all genres, including solo, chamber, choral and orchestral works. His published works for choir include Psalm 121, Her Children Call Her Blessed (based on Proverbs 31), and Hosanna!  God Is Our Refuge and Strength (Psalm 46) was commissioned for the International Schools of China Choral Festival in Tianjin, China and received a J.W. Pepper Editor's Choice award. In 2019, Barta composed Ésaïe 61:1-3 for the Roberts Chorale tour of Franceshortly after the tragic burning of the Cathédrale Notre-Dame de Paris. It was premiered at the American Cathedral in Paris. All I Can Do Is Praise is a recently published collection of five songs for voice and piano with music and text by Barta. His keyboard music includes The Hymn Collection (10 arrangements for piano), Suite for Piano, Variations on All Creatures of Our God and King (for two pianos) and Toccata Joyeuse (for organ and recipient of a second J.W. Pepper Editor's Choice award). The American Organist writes "The Toccata Joyeuse by Daniel Barta is a well-structured multi-sectional work for organ, contrasting lyricism with pyrotechnics, tellingly performed here by Michael Stairs" (Organist, Philadelphia Orchestra). Barta was also commissioned to compose for Sharon Sweet (Soprano), David Kim (Concertmaster, Philadelphia Orchestra) and Ann Martindale Williams (Principal Cellist, Pittsburgh Symphony). In addition, he collaborated with storyteller Roger Petersen, Ph.D., on a set of five Hans Christian Andersen stories for storyteller and chamber ensemble. The set was recorded and released as The Pen and the Inkwell. Two of his works for keyboard, Suite for Piano and Toccata Joyeuse, were released on the DTR label. He is published by Concordia Publishing House, Choristers Guild, Paul Jones Music, Inc and Shaw Music. His music is distributed by J.W. Pepper. He and his wife Peggy have two grown children.