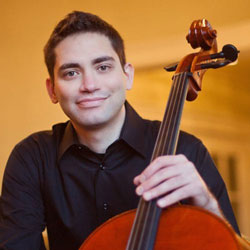 Praised for his “directness of expression” (Rochester City Newspaper), BenjaminKrug is a tenured cellist with the Rochester Philharmonic Orchestra and the newly-appointed cello instructor at Roberts Community Music School. As an ensemble cellist, he has performed regularly with the Rochester Chamber Orchestra, the Finger Lakes Opera, and the Chautauqua Festival Orchestra for the 2019 summer season. As a chamber musician, Benjamin is a devoted member of the Salaff Quartet (with RPO musicians Thomas Rodgers, Molly McDonald and Aika Ito) performing free concerts throughout the Rochester community and serving as Outreach Ambassadors for the Society For Chamber Music in Rochester from 2017-2019. Most recently, Benjamin can be heard on WXXI 91.5 Classical for his performances with SCMR and was featured on WXXI’s HomeStage in September 2020 with organist Peter DuBois. Prior to his position in the RPO, Benjamin was a member of both the Akron and Canton Symphonies and participated in summer festivals including the National Orchestral Institute, Aspen Music Festival, and Tanglewood Music Festival.

Beyond performing, Benjamin is a dedicated pedagogue, currently training in the Suzuki teaching method after studying the method from age 4. As a student of Stephen Geber, Benjamin graduated from the Cleveland Institute of Music with his Master’s Degree and Professional Studies Diploma, after receiving his Bachelor of Music in Cello Performance with departmental distinction from St. Olaf College. Prior to his cello career, Benjamin was a celebrated boy soprano and graduate of the American Boychoir School, touring throughout the country and internationally from the age of 11 and performing and recording with world-class orchestras. Benjamin’s voice can be heard in the movie “Interview with the Vampire” (1994) during the opening credits. In his spare time, Benjamin volunteers at Third Presbyterian Church and can be found taking walks in the 19th Ward with his Devon rex rescue cat, Pippa.