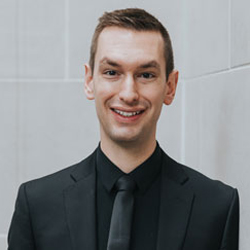 Conductor Adam Potter is Director of Choral Activities and Assistant Professor of Music at Roberts Wesleyan College. At RWC, he conducts the Roberts Chorale, administers the college choral program, mentors choral music education majors, and teaches coursework in conducting and aural skills. He earned a PhD in Choral Conducting and Music Education from the Florida State University College of Music and Bachelor and Master of Music degrees in Music Education and Choral Conducting, respectively, from the Greatbatch School of Music, Houghton College, where he was a Presser and Presidential Scholar. His choral music mentors include Judy Bowers, Kevin Fenton, Brandon Johnson, and André Thomas.

Prior to his appointment at Roberts, Dr. Potter enjoyed positions as Director of Choral Activities at Delta State University in Cleveland, Mississippi and Director of Vocal Music at Dansville High School (N.Y.), overseeing thriving and growing vocal music curricula. He is also an active church musician, having previously served Presbyterian congregations in Florida and Mississippi. During the summers, he conducts choirs and teaches voice at the Csehy Summer School of Music. He has also taught at the Interlochen Arts Camp and Houghton College.

Dr. Potter is a sought-after guest conductor and clinician for honor choirs, choral-orchestral performances, and high schools and colleges, as well as an active adjudicator of choral performance festivals. He has guest-conducted and presented on program building for new teachers, group vocal technique, teaching holistic music literacy in the choral setting, and the joys and challenges of teaching music in rural school communities at colleges, community chorus retreats, and music education conferences in Alabama, Florida, Georgia, Maryland, Mississippi, New Jersey, New York, Ohio, Pennsylvania, and Tennessee. He has also been a guest lecturer at the Kenya Conservatoire of Music and a guest artist with the Nairobi Chamber Chorus in conjunction with the “AVoice4Peace” worldwide peace awareness project. His research interests include sight-singing pedagogy and applications of the servant-leadership model to conducting music ensembles.

His students have pursued graduate study at leading institutions across the country, including the Boston University School of Music, Eastern Michigan University, the Eastman School of Music, and Florida State University. They are serving throughout the United States as conductors of school, church, and community choirs and as music teachers at public and private schools in several states.

Dr. Potter is an active member of the American Choral Directors Association, having served as a repertoire and resources chair at the state level in Mississippi and New York, and maintains memberships in Chorus America, the College Music Society, the National Association for Music Education, the National Association of Teachers of Singing, and the New York State School Music Association. He is also a member of the Golden Key International Honour Society and Pi Kappa Lambda, the American honor society for musicians. In 2010, he was named a Claes Nobel Educator of Distinction, and he was honored to be the ΣΑΕ fraternity’s “professor of the month” in October, 2015. Learn more about Dr. Potter and his work at www.AdamPotterMusic.com.